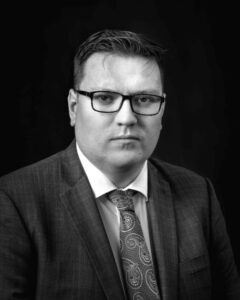 Henry Coleman obtained his Juris Doctorate from Osgoode Hall Law School. Prior to joining our firm as an Associate, Henry articled at the firm. While attending law school, he was a member of the winning Cassels Brock Cup team and won the Harold J. Rubenstein Prize in Restitution Law. Henry also worked closely with the AODA Alliance in advancing the rights of those with disabilities.

Henry maintains a general civil litigation practice, with a concentration in employment law.

Henry was born in British Columbia and grew up in England outside Oxford. Before moving back to Canada, he earned the Dean’s and Bishop’s Chorister Awards from the RSCM. He graduated from the University of Waterloo in 2014 with a BA in Political Science.

Before law school, Henry worked in an industrial setting for a number of years and was a member of the Laborers International Union of North America Local 506.

In his spare time, Henry is an avid Lego builder and goes off-roading in his lime green Jeep.